On November 30, 1992 while speaking at the launching of the Sharing the Vision fundraising campaign for the Library named in his honour, the late G. Emmett Cardinal Carter had this to say: 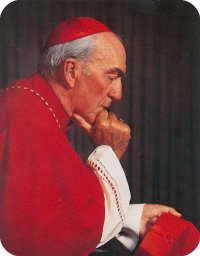 "It seems to me that in any academic setting the most important thing is to teach people to read, to think, to meditate. And what is the best place? The Library. It's the very best place. It is absolutely the heart of any academic institution."

The Cardinal Carter Library is named in honour of the late G. Emmett Cardinal Carter (1912-2003), a former Roman Catholic Bishop of the Diocese of London from 1964 - 1978 with a lifelong commitment to education. In 1978 he was called to be the Archbishop of Toronto. Named a Cardinal on June 30, 1979, by Pope John Paul II, he continued to serve the needs of the Church in the Archdiocese of Toronto until his retirement in 1990.

At the formal opening of the Library on 29 September 1995, the Cardinal said he felt that there was no greater honour than to have a Library named after him: "It is," he remarked, "a form of immortality." Through its mission and supporting goals, the Cardinal Carter Library aspires to the fulfillment of that guiding vision.

The new library replaced The Lester A. Wemple Library, which was constructed in 1970 and enlarged in 1980. Construction of the Cardinal Carter Library began in July 1994 and was completed in June 1995.

Vestments, archival material and artifacts  celebrating his religious life are prominently exhibited in and adjacent to the Eaton Special Collections Room. These include a gold chalice and paten which was given to Cardinal Carter by His Holiness, Pope John Paul II, when he stayed with the Cardinal during his 1984 official visit to Toronto.