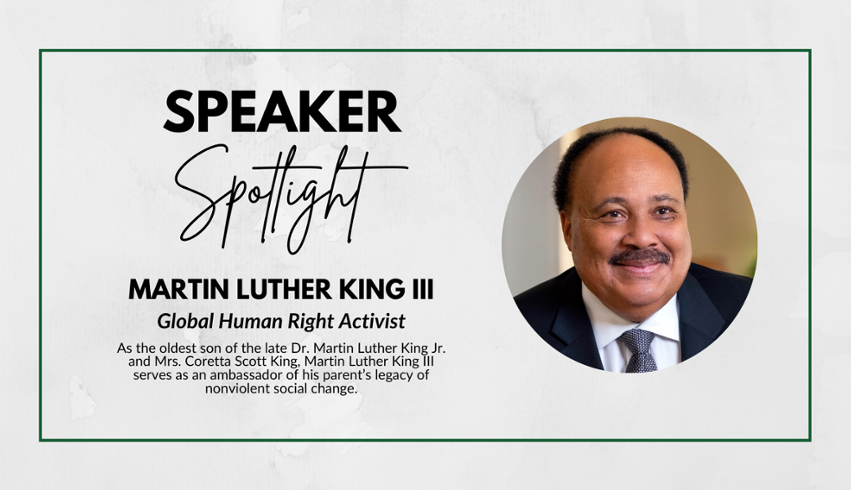 Mark your calendars! Martin Luther King III will be the guest speaker for the KUCSC Annual Speaker Series on Wednesday February 24 at 7 p.m.

As the oldest son of the late Dr. Martin Luther King Jr. and Mrs. Coretta Scott King, Martin Luther King III serves as an ambassador of his parents' legacy of nonviolent social change. Motivating audiences with his message of hope and responsibility for decades, his dedication to ridding the world of social, political, and economic injustice has propelled him to the forefront as one of the world’s most ardent advocates for the poor, the oppressed, and the disillusioned.

A graduate of his father's Alma mater, Morehouse College, King is also the recipient of numerous awards and honorary degrees. He has devoted his life to working in the non-profit sector to promote civil rights and global human rights and to eradicate the “triple evils” of racism, militarism and poverty his father identified as the scourges of humankind. As a high school student, he served as a Page to Senator Edward Kennedy, and continued his public service, supporting social change movements through speaking engagements, appearances and his writing. He was later elected as a member of the Fulton County, GA Board of Commissioners, representing over 700,000 residents.

As the elected president of the Southern Christian Leadership Conference (SCLC), the organization co-founded by his father, Mr. King reinvigorated SCLC by stabilizing the governance, program and development components. As founder and president of Realizing the Dream, Inc., he took his father’s message to a global audience, spearheading nonviolence training in Bosnia Herzegovina, India, Israel & Palestine, Kenya, Sri Lanka and the United States.

A former President and CEO of the Atlanta-based King Center, King remains a member of its Board of Directors. In addition, he serves as a board member of: Southern Christian Leadership Conference, Drum Major Institute, a New York based Think-Tank and the Metropolitan West Management Asset Corporation.

King has also served as an election monitor and observer in South Africa, Nigeria and Kenya. In addition, King has conducted nearly 40 Poverty Study Tours in a groundbreaking initiative, which has sparked public debate and law enforcement advocacy on the issue of poverty.