Ten Social Justice and Peace Studies, three Childhood and Social Institutions, and one Social Work student wrapped up their Experiential Trip to the Dominican Republic on February 20th after 8 intensive days of site visits and participation in community events focusing on transnational activism, citizenship and tourism. The trip was part of Dominican Republic Experiential Learning - Critical Perspectives on Citizenship and Transnational Capital taught by Dr. Allyson Larkin.

From February 12th through the 16th the group immersed themselves into both the city of San José de Ocoa and the nearby community of Rodadero. San José de Ocoa is the capital city of the province of San José where Asociación para el Desarrollo de San José de Ocoa (ADESJO) is located. ADESJO in English translates to an institution of service and development dedicated to bettering the lives of the people in the province of Ocoa in the Dominican Republic one-community project at a time. ADESJO is committed to transparency, technical capacity, and community integration. It is also often seen by similar organizations as being a model due to its highly effective management and organization. 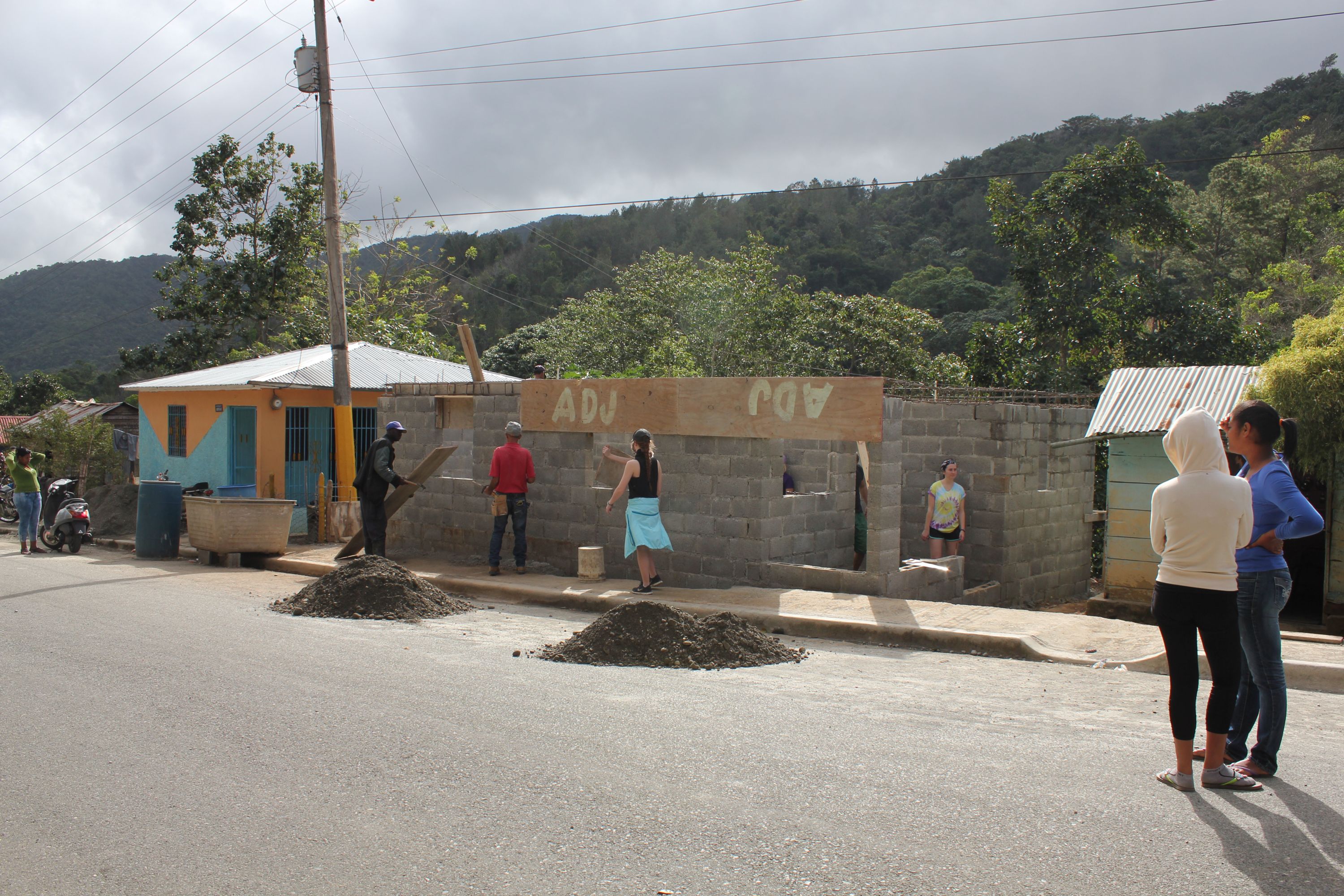 After meeting with the education director of ADESJO, (Asociación desarollo económico de San Juan Ocoa), the group set off into the mountains to stay with the community of Rodadero. This was the community in which the King’s SJPS group funded money towards and assisted in the building of a new home for a deserving family. ADESJO makes various agreements with communities such as Rodadero and with the help of groups such as King’s, ADESJO has been able to construct 9 homes for this community. In addition, ADESJO works in 84 communities across the province of Ocoa. More than 10,000 homes and 69 schools have been constructed by volunteer groups since ADESJO was founded 54 years ago. 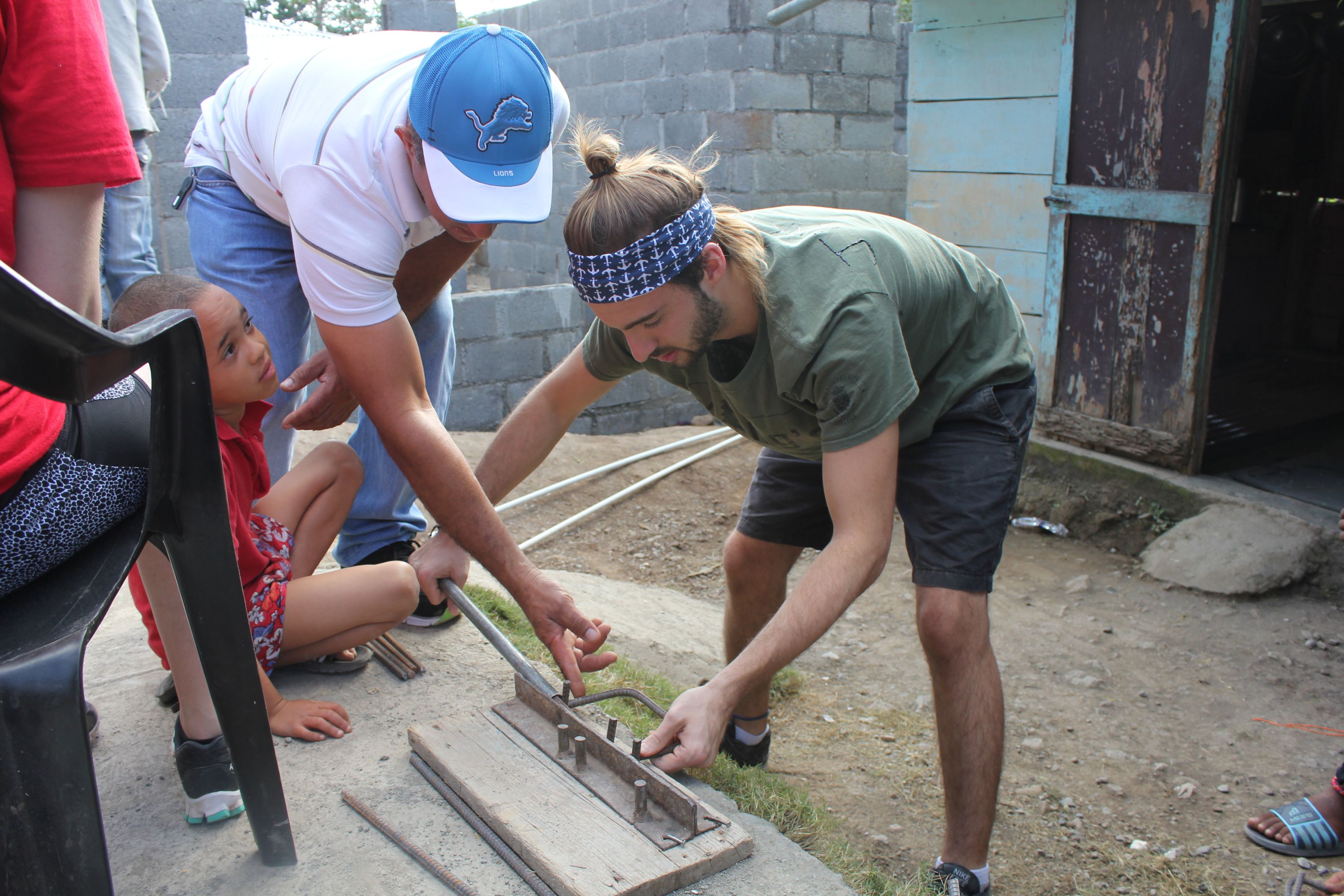 During the stay in Rodadero, the group had three days to engage with the community on a personal level, gain experience with home-building, as well as learn about the ADESJO organic development farm located in the community. The group spent the afternoon on February 15th touring the greenhouses and the apiary. The honey extracted is primarily exported to Europe while some quantities stay in the city of Ocoa. As for the fruits and vegetables, they are sold in both Ocoa and Santo Domingo. 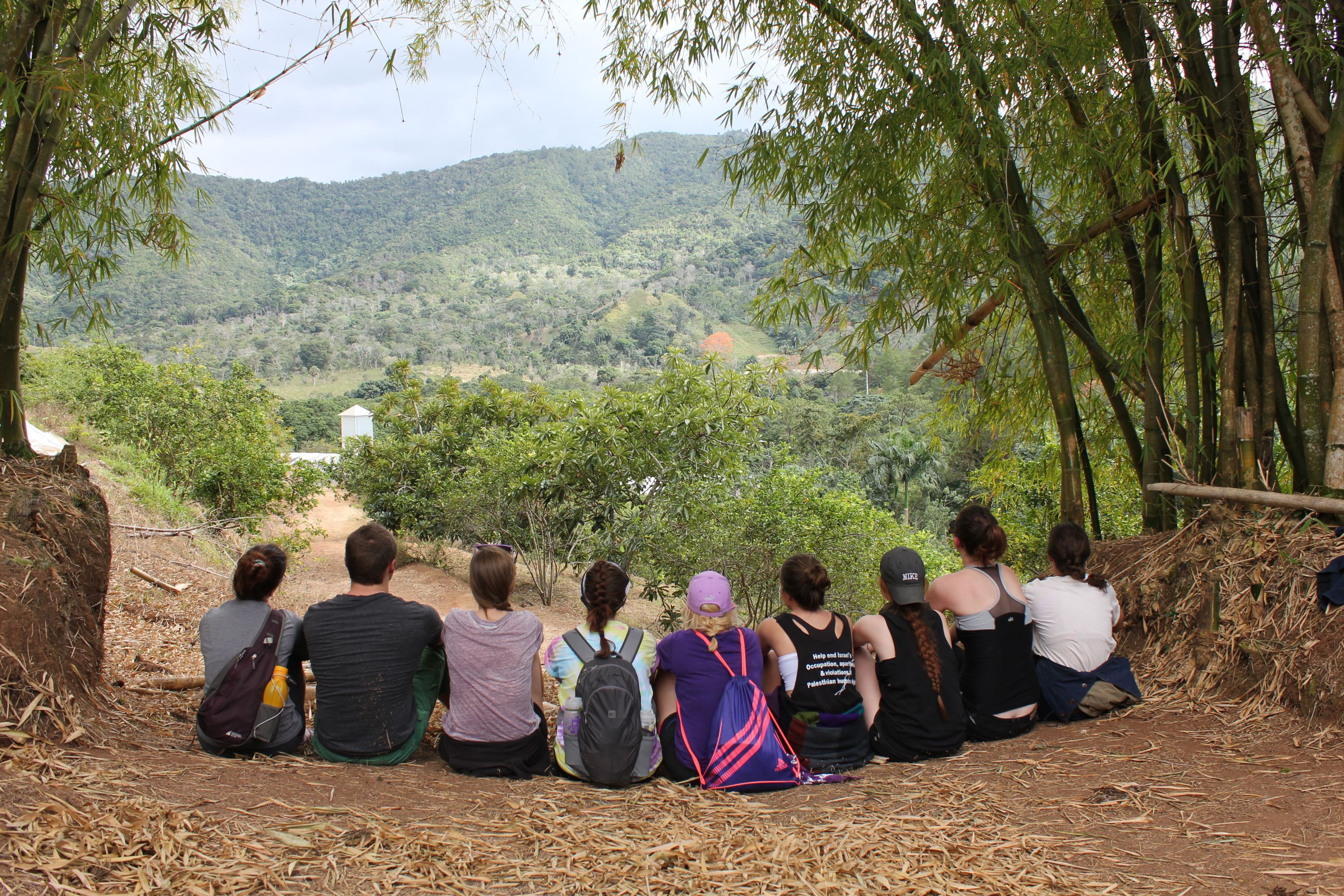 February 16th was an emotional morning of goodbyes in the community of Rodadero. Many friendships developed during the groups stay in the community. The students were off to their next learning experience; travelling to Cooeprative Rio Blanco was next on the itinerary for one day and one night. The students, Dr. Larkin and Teaching Assistant, Klaire Gain, spent the day in Rio Blanco with the Federation of Villagers Toward Progress (Federación Campesinos Hacia al Progreso), learning about sustainability and protection of the environment. The president of the Federation, Esteban Polanco, gave two amazing talks, describing the efforts the community has made for twenty-five years to resist government-sponsored plans for mining and hydro-electric projects. 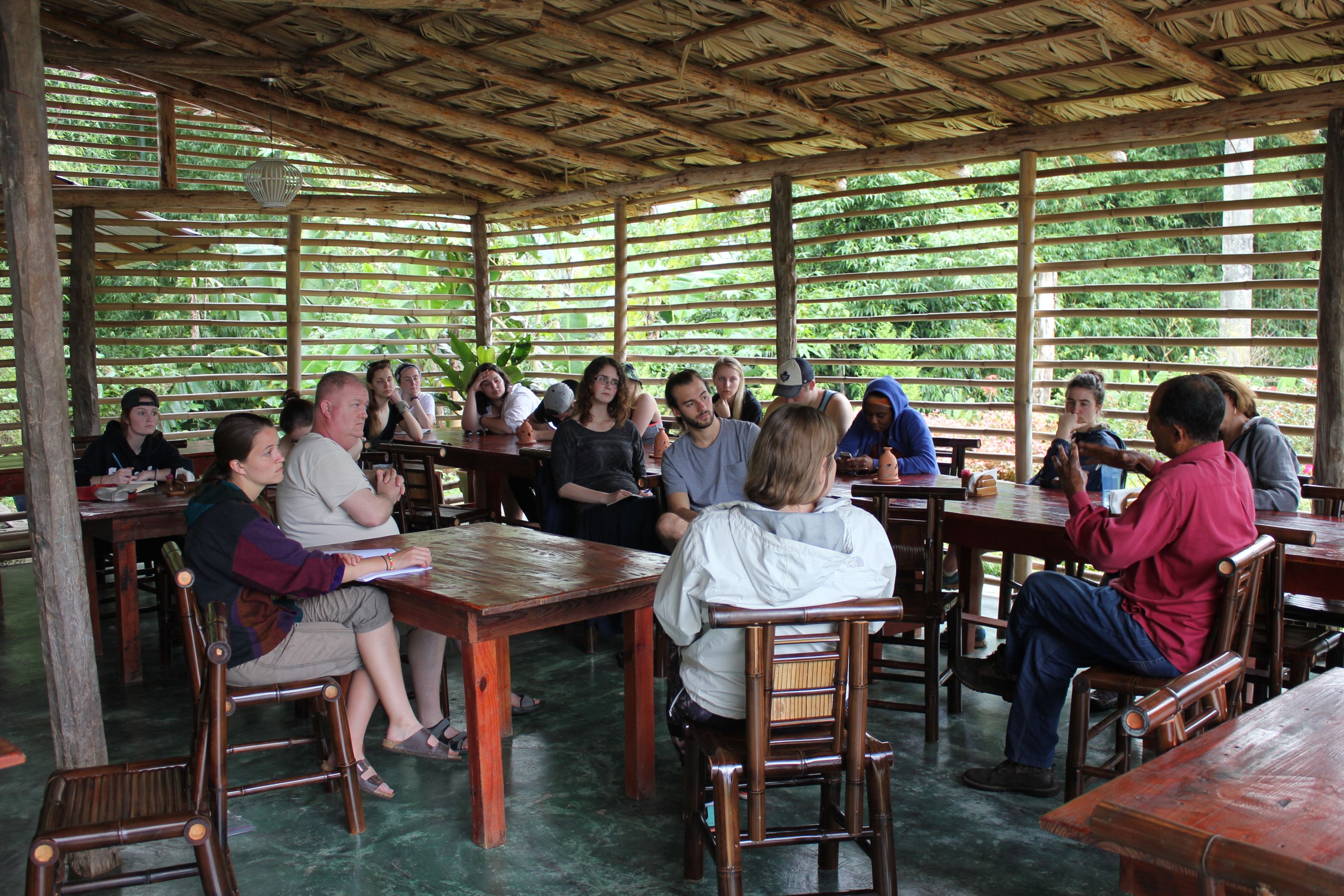 Students also spent a day in the neighborhood of Bonao in Loma Miranda, a community where efforts to resist the opening of a nickel mine are in full-force. The activist group that the group had the privilege to visit with has had a blockade set up for more than five years against the mining efforts. Travelling to Loma Miranda gave the opportunity for the students to hike the Loma Miranda mountain in what the community of Bonao hopes to become a National Park. The mountain is home to natural fresh water and untouched natural resources. Emotions ran high after leaving the community of Bonao after just one afternoon of learning about their resistance to mining. The students were asked to journal each day about their thoughts and questions from each day. Loma Miranda left the students with many questions that had no answers.

Finally, the trip wrapped up with a visit to Pueblo Viejo, the site of a gold mined owned by Canadian corporations Barrick and Gold Corp. Domingo Abreu Collado, an archaeologist and activist on issues related to pollution, prepared the students for the visit the previous evening with a detailed lecture on the impact of the mine, (formerly known as the Rosario Dominicana), on local communities. Concerns have been raised by local communities about the contamination of local water sources, including the presence of heavy metals, cyanide and a growing number of health issues that are suspected to be related to mining waste and water contamination The group’s focus for the day trip was on the response of both the companies and the local government to demands for greater accountability to local communities. Although the mine produces $1.3 billion dollars of gold (6 million ounces of gold), annually, only $3 for every $100 dollar earned remains in the Dominican Republic. The village of Pueblo Viejo and other neighbouring communities are among the poorest in the Dominican Republic. Touring the community and seeing firsthand the personal and environmental impact of this mining operation left the students with many questions that do not have easy answers. The group had a chance to hike a mountain to see just how large the mine is. Spreading over 25 km, the huge tailing pond filled with toxic water, held in precariously by a dam and the processing plant whose fumes fill the air with a sulfurous smell left the entire group in awe and shock, with questions of what efforts they can contribute and supply after returning to Canada.

Disturbed, troubled, and with many thoughts running, the students reflected on their experience as a group upon their return to Santo Domingo.

On February 20th, after eight days of intense learning and experiences, farewells were said to the Dominican Republic and to the wonderful friends who hosted the group’s stay. The students, Dr. Larkin, and Ms. Gain learned a tremendous amount about the impact of gold mining on local communities and the strength that comes from listening to others stories.  The challenge for the students now is to explore ways to remain connected to the communities they visited and to work on their behalf to stop continued community exploitation by Canadian mining companies.

A special thanks goes to King’s SJPS alumna ’13 and ADESJO employee, Elise Dunn. Elise was the group’s Spanish translator and itinerary coordinator for the entirety of the experiential trip. Check out Elise’s journey of relocating to the Dominican Republic here.

To learn more about studying SJPS at King’s, click here.