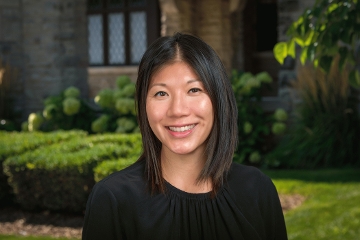 Professor Chau’s research examines the shape of contemporary Catholic witness and mission in secular cultures such as that of Canada.  Her book, "Solidarity With the World: Charles Taylor and Hans Urs von Balthasar on Faith, Modernity, and Catholic Mission" (Cascade Books, 2016) mines 20th century philosophy and theology for the question of dynamic and attractive Christian witness in 'post-Christian' cultures.  She is currently working on a second monograph on Catholic Christian ethics and has recently completed articles on the legacy of Vatican II, Asian theology and the Catholic community, and peacemaking and social innovation in Christian faith-based communities such as Taizé and L’Arche.

Dr. Chau serves as Director of the Centre for Advanced Research in Catholic Thought at King’s and is on the editorial board of the Journal of the Society of Christian Ethics.

“The Ways of Perishing and the Practices of Hope” in Hope Today (Eugene, OR: Wipf and Stock Press), Forthcoming.

“Religion and Justice: The Faith-based Intercultural Peacemaking of L’Arche and the Community of Taize”, The Way, July 2015

“ ‘What Could Possibly Be Given?’: Towards an Exploration of Kenosis as Forgiveness – Continuing the Conversation Between Coakley, Hampson, and Papanikolaou”.  Modern Theology, January 2012.

“Cultural Artisanry and Liturgical Imagination: The Contributions of Charles Taylor, William Cavanaugh, and John Paul II to the Retrieval of Time in God”.  Journal of the Canadian Chapter Fellowship of Catholic Scholars.  Fall 2011.

“Whither Justice and Religion?  The Faith-based Intercultural Peace-making of L’Arche and the Community of Taizé” at ‘Religions and Social Innovations’, University of St. Michael’s College, Toronto, ON, October 2013.

“Culture, Justice, and the Gift of the World Church” at ‘New Wine, New Wineskins’, University of Notre Dame, South Bend, IN, July 2013.

“Reframing the Picture: Reconsidering Religious Freedom in Canada through the Optic of Charles Taylor's 'A Secular Age'” at ‘Religion and Public Life Conference’, Wilfrid Laurier University, Waterloo, ON, Spring 2010.

“Epiphanies of Taylor: Towards a Philosophical Space for Faith in Late Modernity”, at ‘Refractions of Modernity: Contributions of Charles Taylor to Social and Political Thought, Philosophy, Ethics, Spirituality, and Religion’, McGill University, Montreal, QC, Fall 2006.