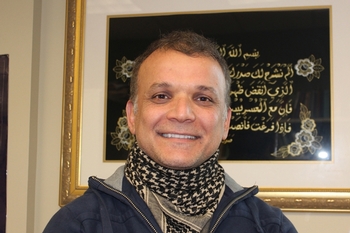 I am mostly interested in the ways in which religion is experienced by believers and non-believers alike.  In my previous academic work I have examined the idea that a pure religious experience does not exist.  There is always a mixture of context and particular structural religious underpinnings that provide the interpretive framework, which in turn shape religious experiences.  For example, it is Rumi’s androcentric cultural context coupled with monotheistic orientation of Islam that brings about privileging of male as the ontologically independent gender in his work.

Currently I am following up on this “modified contextualist” approach to religious phenomenon by examining two different events.  First, I am examining the concept of belief as it relates to the conversion of westerners (Euro-American subjects) to Islam.  I am arguing that for (born-)Muslims the western converts function as the signifiers of belief.  It is the western converts who performatively settle the questions of belief for the rest of Muslims by acts that are tinged with the converts’ typical zeal to gain insider-status.  As a subject outwardly embodying the effects of the belief, a western convert functions as a “fetish.”  Like the sexual arousal of a fetishist, which cannot take place except in the presence of a psychosexual fetish, for (some) Muslims the deepest indications of belief are invoked by the converts’ typical hyper-performativity of their faith.  Muslims’ belief about God, prophets and angels remain intact, but that belief remains objectively insufficient until it is fetishistically invoked by the western convert.  Conspicuous western converts in effect believe for the rest of the Muslims.

Historically scholars of religion argued that proof is derived from belief.  They defined belief as a Pascalian existential “wager” (Cantwell Smith), a subjectively sufficient judgment (Kant) hence weaker than knowledge (Hume), with no need of proof (James, Wittgenstein).  I suggest that perhaps it is time to reconsider these characterizations of belief as the producer of proof.  At least in the case of western converts to Islam we may be witnessing the reliance of belief on proof.

Second, and along the same lines, I am working on the proliferation of common jokes about God and Islam in contemporary Iran.  These “religious” jokes express more than politically subversive ideas that are censored by normative socio-political mechanisms.  They express popular “beliefs” with implications reaching far into the theological realm.  Aside from their politically subversive character, these jokes interrogate Islam’s religious/spiritual claims, something that has its historical roots in Perso-Islamic cultures.  More importantly they popularize the critique of belief, something that was the privy of the polemicists and theologians is now common among people.  I argue that these jokes are not simply carnivalesque parodies of an otherwise somber façade of Islamic beliefs and practices represented by the ruling clergy.  By pointing to the absurdity at the core of literal conformity to “Islamic” beliefs and practices these rude and transgressive jokes turn out to be quite mystical.  They bring God closer to the common experiences of people and point to the emergence of popular fluid epistemologies.

Rumi and the Hermeneutics of Eroticism (Brill, 2007) Book

(2010) "The Erotics of Sacrifice in the Qur’anic Tale of Abel and Cain."  Under Review, International Journal of Zizek Studies.