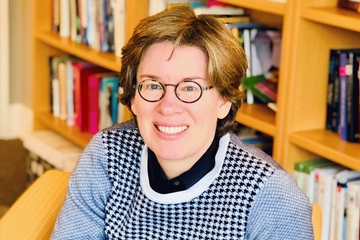 Dr. Melnyk Gribble has taught at King's for over 20 years. She recently completed a term as Associate Academic Dean (2019-2022). She has served as Chair of the Department of Psychology (2017-2019), Acting Chair of the Department of Interdisciplinary Programs (2021), and Acting Vice-Principal and Academic Dean (Summer 2020). Her research expertise is in forensic developmental psychology.

Wilson, C.A., & Melnyk Gribble, L. (2016, May). Removal of glasses impairs face recognition, but only for certain types of glasses. Poster presented at the annual meeting of the Association for Psychological Science, Chicago, IL.

Melnyk Gribble, L., & Wilson, C.A. (2016, March). Eyes on the disguise: How does changing the type of eyeglasses influence face recognition? Poster presented at the annual meeting of the American Psychology-Law Society, Atlanta, GA.

Ewanation, L., & Melnyk, L. (2015, June). Identifying whether the mystery man or elimination lineup is most effective for child eyewitnesses. Poster presented at the annual meeting of the Canadian Psychological Association, Ottawa, ON.