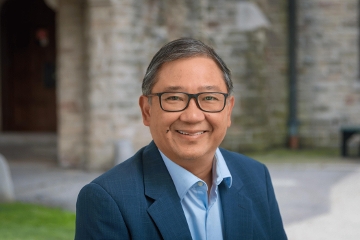 Julius-Kei Kato is associate professor of Biblical and Religious Studies at King’s College-Western University, London, Ontario, Canada, where he teaches courses on the New Testament, Religious Pluralism, and Spirituality, among others. He has done graduate studies in Jerusalem (Hebrew University); Rome, where he obtained a Licentiate in Sacred Scriptures (S.S.L.) from the Pontifical Biblical Institute in 1998; and Berkeley-California where he received a Ph.D. in Systematic & Philosophical Theology (with a focus in hermeneutics) from the Graduate Theological Union in 2006. He did his undergraduate studies and later taught as Assistant Professor at the Sophia University in Tokyo, Japan. Among his published works are How Immigrant Christians Living in Mixed Cultures Interpret Their Religion (2012) and Religious Language and Asian [North] American Hybridity (2016). Both works deal with how hybridity in a globalized world can serve as a hermeneutical lens to understand religion-spirituality.

Facebook: JK Kato-Studying the Human Quest for Depth and Transcendence. I occasionally post things relevant to the study of religion and spirituality. https://www.facebook.com/jkkato11

My major academic interests are (1) Christianity’s founder, Jesus: What’s the history behind this figure? How has he been understood in history?; (2) the early Christian movement – its history and literature; (3) the study of our contemporary context of globalization in which different cultural and religious worlds encounter and mix (I refer to this as “hybridity”) and what that situation may mean for the future; (4) new trends in religion-spirituality among young adults such as “Spiritual but not Religious” (SBNR), Religious “Dones” (people who are “done” with religion), Religious “Nones” (people who have no religious affiliation), Multiple Religious Belonging, among others.

In my 2012 book How Immigrant Christians Living in Mixed Cultures Interpret Their Religion: Asian-American Diasporic Hybridity and Its Implications for Hermeneutics, I described how the experience of being simultaneously situated in different worlds (hybridity) influences how one interprets one’s religious-spiritual traditions. There, I also expressed the conviction that such hybridity, which is becoming increasingly common in a globalized world, is actually an important key in making religions less toxic and exclusionary and more inclusive and committed to peace.

I have also applied these insights more specifically to the New Testament and to other theological themes. These efforts have resulted in my second monograph entitled Religious Language and Asian American Hybridity (New York: Palgrave Macmillan, 2016).