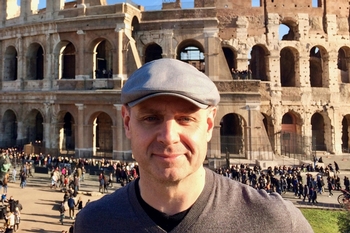 Prof. Broad teaches Canadian history (with a particular emphasis on intellectual history), war and society studies, and historical theory and methods. In addition to being a member of the Department of History, Prof. Broad helped to design and teaches in the King’s Foundation in Western Thought and Civilization program.

Graham Broad has been a member of the department of history at King’s since 2009.  He is a scholar in the field of war and society studies and the author of A Small Price to Pay: Consumer Culture on the Canadian Home Front 1939-1945 (UBC Press, 2013, shortlisted for the CP Stacey Award) and One in a Thousand: the Life and Death of Captain Eddie McKay Royal Flying Corps (University of Toronto Press, 2017). He has served as a guide for the Canadian Battlefields Foundation in Belgium and France.

He is currently at work on several projects, including a history of 24 Squadron, RFC, during the Battle of the Somme (WLU Press); editing the war diary of Lt. Leslie Miller, Canadian Expeditionary Force (University of Toronto Press); and is serving as a contributing editor to the forthcoming volume Ten Days of the CEF (University of British Columbia Press.)

With Jonathan Vance he is the co-director of the SSHRC funded website Wartime Canada (www.wartimecanada.ca) the internet’s largest repository of digitized wartime ephemera.

One in a Thousand: the Life and Death of Captain Eddie McKay Royal Flying Corps (University of Toronto Press, 2017)

Food Will Win the War: The Politics, Culture, and Science of Food on Canada’s Home Front by Ian Mosby. University of Toronto Quarterly, Volume 84, Number 3, Summer 2015

Warlords: Borden, Mackenzie King, and Canada’s World Wars by Tim Cook. In The Journal of Military History (Vol. 77, No. 2, April 2013)

"Eddie and Us: Lessons Learned in a Class Project to Commemorate a Fallen Soldier of the Great War."  In Teaching History: A Journal of Methods, Vol. 36 (1) Spring 2011.

A Fair Country: Telling Truths About Canada by John Ralston Saul. In The Beaver, April/May 2009.

"The Worst Canadian: Sir Sam Hughes." In The Beaver, August/September 2007.

Review essay of Fight or Pay: Soldiers' Families in the Great War by Desmond Morton and Hell's Corner: An Illustrated History of Canada's Great War by Jack Granatstein. In The Beaver, June/July 2005.

"Wartime Prices and Trade Board." In The Oxford Companion to Canadian History. Toronto: Oxford University Press, 2004.

"Painters Eleven: the Shock of the New." In The Beaver. February/March 2004.

"'Not Competent to Produce Tanks.' The 'RAM' and Canadian Tank Production in WWII." In Canadian Military History. Winter 2002.